Dance While You Can.
Festivals in turbulent times 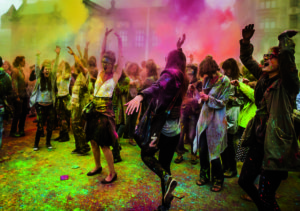 Can we speak of a festival’s inclusive dramaturgy? What sets its narrative line, and how is it approached by the viewers and participants in current times of the crisis of trust in democracy and community? How to reframe the notion of inclusivity, while remaining at the intersection of politics and aesthetics?
In her visit to the MAMbo, curator and researcher Kasia Tórz – interested in the ethical and political dimensions of art – will lead the second seminar of ELEMENTARE, based on her ten years of experience at the Malta Festival in Poznań, the most important and long-lasting theatre and performing arts festival on the Polish scene.

ELEMENTARE is a program involving research, analysis and encounters, conceived and promoted by the Associazione Ubu per Franco Quadri and dedicated to practices in curating in the performing arts: theatre, dance, performance, opera. The Seminars – hosted by various Italian institutions promoting performance and the contemporary arts – invite artists, operators, students, critics and spectators who are interested in meeting international curators, while the latter turn their own actions into a critical space, focusing on the relational and experience-based nature of the performing arts.
At the centre of their interests lies a wide range of issues that revolve around the representation of spaces and the spaces of representation, bodily proxemics and the modes of perception, pragmatic urgencies and the activation of transversal imaginative tactics. The attention goes to the flow of intuition and the unexpected humanity that define this way of acting, as though to set out a horizon of resistance to contrast the current institutional drain in cultural work, reaching the elementary and political lymph of erratic experiences.

The meeting with Kasia Tórz come after the seminar with Frie Leysen, held last December in Ravenna, and will be followed by an encounter with Florian Malzacher, as part of the Triennale Teatro dell’Arte in Milan, on 26 January 2018.

Kasia Tórz is a performing arts curator, researcher and editor. A graduate in Philosophy at the Warsaw University and in Cultural Diplomacy at the Collegium Civitas in Warsaw, and having completed her Doctoral Studies at The Institute of Art of the Polish Academy of Sciences, she has written and edited many volumes on contemporary theatre and since 2008 has been responsible for programming the Malta Festival Poznań (PL).

The Ubu per Franco Quadri Association
Committed to the challenges involved in protecting and recognising the full value of Franco Quadri’s cultural work, and to bringing this collective cultural history into focus in light of our own times, the Association dedicated to this outstanding theatre critic and editor encourages a thorny, unsettling and playful criticism, so as to cultivate an active gaze and a gesture of civic reawakening.
From the Ubu Prizes to the numerous Ubulibri publications – including the Patalogo, a glorious almanac of theatre that brought together unpublished materials, rapid theoretical surveys, tensions, breakdowns and successes in the international scene’s evolution from 1979 to 2010 – the Association works to give continuity to this material and transform it, attempting to identify the past and present foundations of this innovative and fearless critical undertaking, which has permanently changed our way of looking at and speaking of the stage.