in collaboration with NODE 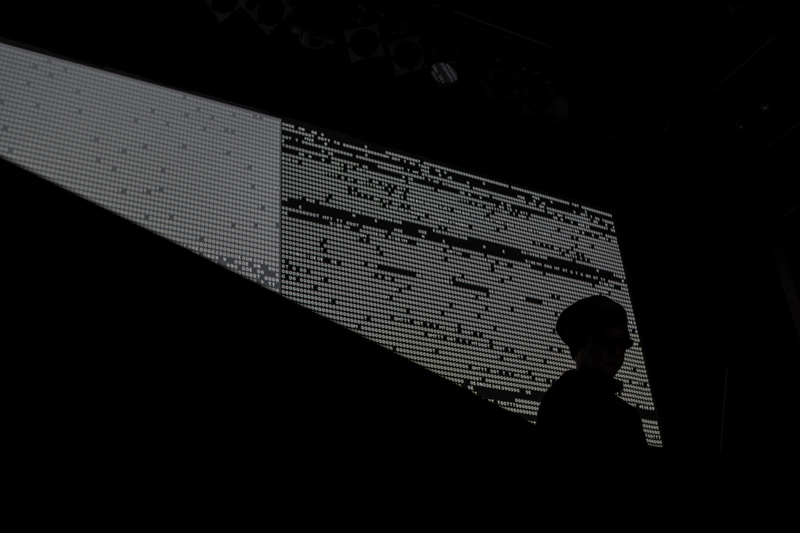 Eight albums in almost twenty years and even more installations and performances where his video-sound art turned into a sensory experience, an undeniable far-sighted interpretation of what binds arts and technology: all this made Ryoji Ikeda one of the most representative protagonists of contemporary music and arts scene. His Zen philosophy conveyed through the language of machines keeps actual throughout the decades constantly drawing the interest of the world’s major artistic institutions such as Tate Modern, Centre Pompidou, Hamburger Bahnhof, Ars Electronica and MoMA. Supercodex project  is the last step of a trilogy started in 2005 with  Dataplex  after which Test Pattern followed three years later to be performed live in Italy in 2010 NODE edition. These three creations collect the results of Ikeda’s complex analysis of the dual relation connecting digital sound and its translation into code. Issued from his pursue of integrity, essentiality, decomposition and resolution so well expressed in two of his masterpieces –  +/-  and  Matrix -, the artist’s goal consists in the mathematical processing of sound, in a sort of calculation which may be able to turn algorithms into real means of expression and resulting into visual and sound representation of the carried information. This concept was conveyed not only through sounds but also through visual and performing techniques on which the Japanese artist focused in recent years; his performances gradually turned into real multimedia installations like the one occurred in New York’s Times Square and the Supersymmetry project issued from his residence at CERN in 2014. Digital arts dealing with itself is far from being self-referential even if it may seem so when approaching Ikeda’s work for the first time. The man-machine relation is taken to the extreme through a rather microscopic-detailed investigation resulting into unexpectedly involving audio-visual works. This research realizes at its best in live performances due to the unexpected and futuristic high-definition black and white structures melting with austere and magnetic sound patterns. That is how Ikeda manages to translate both physically and esthetically the visual and auditive dimensions, thus unveiling the existence of a beating core hidden inside codes and formulas as well as the arithmetical and computational essence of sound.

fuse* is an Italian multi-media artist collective founded in 2007 to explore the creative potential of digital code and technologies. The project called Ljós (Icelandic for ‘light’) was conceived as the follow-up of fuse* activity in the field of digital and performing arts through the strong connection between light, space, sound and movement. In this background, dancer Elena Annovi becomes the core of the performance, the mean through which the audience can enter a surreal and dream-like space made up of sounds and images reacting and interacting with her in real time. Suspended in universal immensity, the body can explore its own consistency and discover the power of gesture, which is connected with the neural system where it finds its origin in thought: Ljós, the inner light.